OFFICIAL Titanic artist Ted Walker, 74, was putting the finishing touches to his most famous painting The Maiden Voyage when he nipped out to put the kettle on. 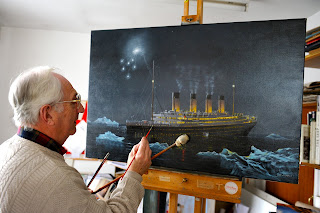 He returned minutes later to find the painting “spookily” on its side with the bow up appearing as if the ship was sinking.

Working painting ships for Cunard, the company that bought out Titanic company White Star Line, Ted also jets around the world to feature his top paintings in Titanic exhibitions.

Ted said: “I feel like I have a spiritual connection to the Titanic. I've been painting pictures of the Titanic for over 30 years. It started when in 1979 a gentleman commissioned me to paint a picture for him.

”He loved it and after that there was a lot of interest in it and we published the print for it.

“I believe that painting was a gift that was given to me from birth. When I was three years old I used to paint ships that used to go past the Mersey – strange looking ships but ships nevertheless.

”I first started out as an apprentice decorator so you could say I was always painting but when I came back from work I would just sit there and doodle and draw non-stop.“

Ted, who lives in Sefton, is scheduled to be featured in the New York Times newspaper next month.

One of his most famous paintings of the Queen Mary featured on a first class stamp in 2004 but he considers the Titanic paintings to be his prized possessions.

”Maiden Voyage was one of my favourite paintings, It's one of the most popular images of the Titanic and I worked all day and night on that particular one.

“There's all kinds of strange things that happened. When I was painting the ship in 1999 I went out the room for five minutes, came back and the painting had fell appeared as though the ship was sinking." 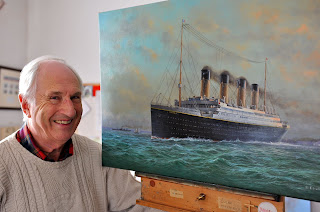 ”Also, a few years ago, I went under the knife for an operation and while under the anaesthetic I had a vision about first officer William Murdoch.

“He was shooting warning shots with a pistol to try and keep some order on the ship.
”I know I was under anaesthetic but it seemed so real.“

Ted also works with historians to paint accurate pictures of the Titanic's journey.
”There's about 800 hours in every painting that I do.

“I used to paint every day and sometimes throughout the whole of the night to meet tight deadlines but now I try and limit it to about four hours a day.”

Ted, who is set for an exhibition of his work at the Williamson Art Gallery next month, dedicated his successful life and career as an artist to his loyal wife Susan.

He added: “We have been married for 40 years and I could never have managed this without her.”
Posted by Rave at 08:19 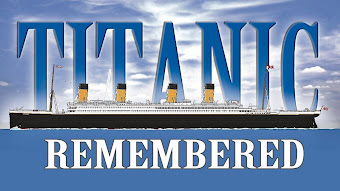